This is one of the many reasons I love Strava.  Free stuff! 🙂 Strava Boston 2013 pint glass and Strava compression socks!* 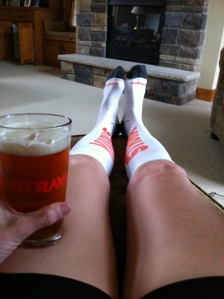 Is there any better way to unwind after a 12 mile run in a major thunderstorm (Sorry Mom!  Not very smart, I know) than with a beer and kicking the legs up with some comfy compression socks doing their magic??

I had RSVP’d for the Strava Boston finishers party – but it was obviously cancelled because of the bombing.  How cool is it that they mailed the goodies they had planned on giving the Boston Marathon finishers??  And how cute is the postcard they sent with their running route spelling out Boston?? 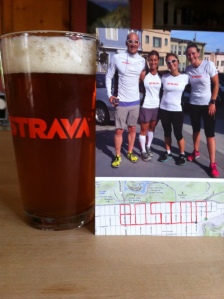 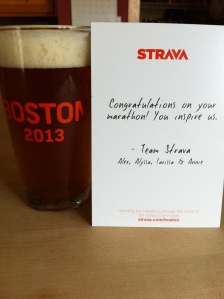 I need to get more creative with my runs and try to make routes that spell stuff!  On that note, I have to say that a group of people I run with are getting pretty in to the whole Strava thing – with titles to their posts that describe the run, explain any deviations from “normal” pace, etc.  And the whole group is getting in to the kudos and comment thing.  Not sure if Strava intended it, but I see it kind of being like a quick way to blog about your daily run, without actually taking the time to blog about your daily run!  Don’t worry, I’ll still stick with the blogging.  I have too much to say about how much I love running.  Stay tuned.

*For those that have been hiding under a rock and don’t know, Strava is a GPS powered run and ride analysis/tracker.  Very cool.  Upload data from your garmin and it shows your route, pace, who you ran with, who went fastest on certain segments, etc.  Fun stuff.

Rest day from running tomorrow.  Finished the week with 57 miles.  Wheeee.  Hoping to get the bike out for a test ride.  Fingers crossed that there are no falls. 🙂