Remind me again why I thought it would be a good idea to move around the holidays??? 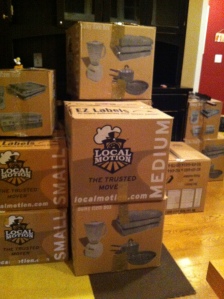 Things I have learned while packing up years of crap:

When I was running this morning I realized that one of the things I’m going to miss the most about my current house is the running.  I have EVERY possible running distance measured out from my driveway, in every direction.  I have my neighborhood measured out (.85 miles when I hit every cul-de-sac) and know exactly how many laps I need to do for each distance run.  My neighborhood is safe and well lit and I can get my daily run done before the world is awake, and not leave the hood.  When I want to do a hilly route, I know which direction to head.  When I need a hill that’s 50 meters and a good incline, I know where to find one within a mile of my house.  When I need a 6 mile route, I know exactly which tree to stop at on the trail for the turn around point.  Sigh.  I know change is good and necessary and that I’ll find new running routes.  But with so many other major things changing right now, a big part of me wishes that my running routes would not need to change.  Sigh.