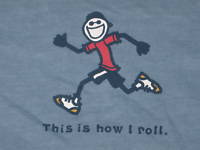 I am certainly not an expert on this whole running and marathoning thing.  But I have run 9 marathons, so I have certainly learned a thing or two about how to train for them (what to do and what NOT to do).  I’m too busy  with super important Saturday night stuff around the house, to do a full blog post on every single training tip that my 5 readers might care about.

So for now I’ll just tell you about the thing that I am mostly concentrating on during this marathon training cycle,  which I think is hugely important, for me:

Running my own runs.

You often hear people talk about running your own race, which to me means not getting swept up in the excitement of being with a pace group or a friend or whatever, and running beyond your ability on that day.  It means doing your own thing in a race.  And, before this cycle, I would say that I understood that in the race context.  BUT – this cycle I am also concentrating BIG TIME on running my own runs in the context of my training.  There is a lot of info out there about proper training paces, the purposes of the different types of runs, etc.  And you read a lot in the books from the experts about doing no more than you need to in order to achieve your goals.  The whole, “less is more” thing.

Confession:  in the past I have read about this stuff, understood it in theory, and then completely disregarded it.  Because to me, “more is more”.  And “faster is faster”.  But when I really truly stop to think about it, the “less is more” and “only do what you need to do” theory is really the way to go.  And THAT is what I have been focusing on this round of training.  I’m picking up the intensity, because I have ambitious goals for this marathon.  But I am trying to be smart about my training and keep myself healthy and in top training shape.

So, examples from this week:  On Wednesday we did 2 x 2 mile repeats  in the middle of our run.  We were supposed to be at threshold, but with the 2nd mile faster than the first mile.  It was tempting to run crazy fast because it’s only 2 miles and therefore I could (physically).  But I was very very disciplined and stayed within my threshold range, while following the instructions to run mile 2 of each repeat faster than mile one.  It was hard not to get caught up in running fast with the group.  BUT – running my own run allowed me to not be dead tired the next day and knock out 10.75 miles (the next day) at a moderate pace.  If I had run my 2 miles repeats fast with the group, I would have been too exhausted to train properly the next day. Second example of me running my own run this week: today on our long run we were doing 16 miles with about 3.75 in the middle at goal marathon pace.  In our group of about 10, I was near the back during the GMP miles, because I forced myself to not get caught up in trying to run fast just to run fast and instead I focused on MY run, my goal.  And I was exactly where I wanted to be.   And I think training smart like this will give me a better chance of accomplishing my marathon goals.

One thought on “Running My Own Runs”