I was all set to go on a big group ride tomorrow. 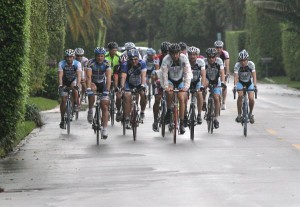 I have no idea who these people are, I just googled group ride images

I saw my running buddy KH (who I miss so much since she’s not training for a marathon now) on our group run this morning and she convinced me to try tomorrow’s group bike ride.  You know how that happens – you’re with someone and you get talked into something?  So for some reason when I was talking to her, and then to my other new biking friend later in the day, riding with 20 – 25 other riders at 5:30 a.m. didn’t sound so bad.  It even sounded fun.  So I said yes.  And I was really gonna do it.

But by noon, I was starting to re-think things.  I was nervous.  I started thinking about the falls that I’ve had on my bike already (and here).  I started thinking about my clipping in issues (I am fine when I’m on my own and when there isn’t traffic, but at intersections and when I’ve been with a couple other people on rides, I get REALLY nervous and can’t clip in, and then I look down at my feet to try to clip in and I swerve to the side; uggggg; if I was riding with others and did this, I’d hurt myself or them.)

By three o’clock I was starting to stress out about the morning ride.  Major stress.

At six o’clock I was having dinner with a friend and mentioned how stressed I was about the ride and as I was talking about it, I realized that I needed to bail.  I get the whole “You don’t know if you like something until you try it” thing.  But this is different.  I shouldn’t be completely stressed out and freaked out about a ride.  And if I am – and if I were to go into the ride stressed out and freaked out – there is a decent chance I would hurt myself (or someone else!).

So tomorrow at 5:30 a.m., I won’t be stressing out about a group ride.  Instead, I’ll be doing what I love doing.  I’ll be watching the sun rise while I’m running.  And I can’t wait!

5 thoughts on “The Group Ride That Wasn’t”