I wish every morning could start off like today did.  Group hill workout at 5:45, followed by my maiden voyage on my bike! If only this job thing didn’t get in the way and I could just do fun stuff all day long!

Then came my biking “lesson” from Coach MB.  First goal:  learn how to clip in to the pedals.  MB showed me how to do it with one pedal and me just standing there.  Turns out I was doing it wrong when I tried it yesterday.  I was trying to back my mid-sole into the clip instead of toeing into it.  I was excited to figure out the right way and was ready to try it “for real” with both pedals.  Ready?  Go!

FAIL.  Literally within 30 seconds of me trying to do it, I fell.  Hard.  Bruised my ego, as well as scraping up my elbow and upper thigh. 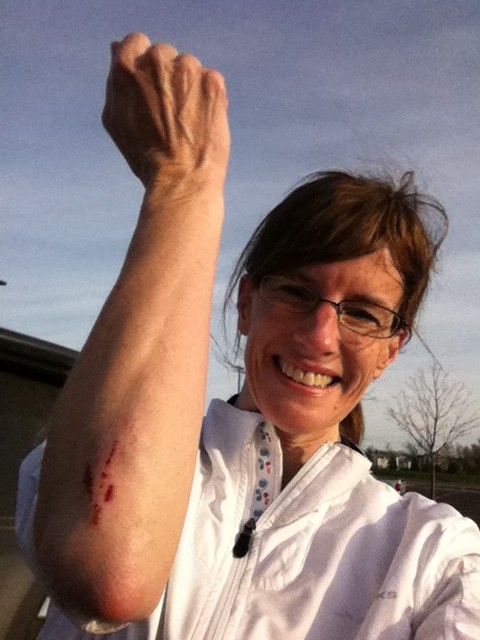 Tried it again a second time.  FAIL.  Fell hard again.  WTF?   I started tearing up and was frustrated.  If I had been by myself, instead of with Coach MB, I would have started bawling and quit and tried to return my bike.  But he was there, trying to help me figure out what I was doing wrong (both times he turned his back for a second and I was on the ground).  And trying to encourage me to give it a try.  I was scared and nervous and doubting myself and not wanting to fall again.  He told me I can’t let myself be afraid.  He explained things again and then demonstrated what I needed to do.  OH!  Now I get it!  You need to clip in to one pedal and then move the bike forward and start pedaling with the clipped in one and then clip in the other one.  I am seriously SO stupid – I had clipped in on one pedal and then just sort of stood up (raised my body) and tried to clip in on the other one while I was basically standing still.  Duh.  Of course I’m going to fall.  I should have worn elbow pads and hockey breezers!  🙂

So I did it!  And we were off.  Tooled around the parking lot first while he explained some basics to me and had me practice shifting gears.  I learned that you need to be pedaling while you shift gears or you could go flying over the handle bars.  WTF???  Shouldn’t there be some big warning label on the bike about this?  I could totally see myself doing this.  How would I have known this?? Thank goodness I had him with me to explain important stuff like this.

When I was comfortable with the basics, we ventured out of the parking lot and onto the road.  Yikes!  Again, thank goodness he was with me.  He did all the turn signals, traffic checking and rode to my left, which sort of sheltered me from cars.  🙂  We went through several neighborhoods, up some inclines and down some declines.

Did I love biking?  No.  Not yet.  But, the good news is I didn’t hate it.  I am SO type-A and want to be in control of everything and I was NOT in control today, which scared me.  I think a good part of it is because I’m ignorant about how the bike works, rules of the road, etc.  I can read and practice and learn and get control of those things.  But part of it is also just that biking is different than running – being on a piece of equipment that is transporting you instead of just being on your two feet is a bit intimidating for a Type-A person.  BUT, I will confess that part of me loved it and thought “this is just what I need”.   It is exciting and different and, truthfully, feels exhilerating to be out of my element.  Fingers crossed that I can avoid more of those falls though!

8 thoughts on “My Maiden Voyage!”