Again, didn’t get the 3:40 something I wanted, but given the conditions and my leg, it didn’t end up too bad. I haven’t heard for sure, but I think the temperature was about 60 degrees at start line and 84 by the time I finished. Not a cloud in the sky. I slept horribly the night before. I tried going to sleep at 8:30 and still hadn’t fallen asleep by 12:30. Woke up about 3:00 and couldn’t get back to sleep, so finally just got out of bed at 3:30. Did my routine and things seemed ok. I did feel a little bit off because of the lack of sleep, but I was still ready to go.

The weather looked like it was going to be warm as the day went on, but I was hopeful it would hold off until I was near the end of my race. Chatted with Jen and Chris for a bit before the race and then lined up near the 3:40 Clif Bar pacer.

Me, Chris and Jen at the start line
I had decided with the warmer weather and the sun my best strategy would be to follow him for as long as I could and back off a bit if necessary (or speed up if I was feeling great!). I still had about 6 minutes built in to BQ, so it seemed do-able.
Miles 1 – 8:
I managed to stay with the 3:40 pacer. Kept him just ahead of me and I tried to run on the left side of the road and behind him, so I could get the few bits of shade that existed and avoid the extra heat that was around his group. There were a TON of people that started out with him. I stopped at a few water stops and was still able to catch up to him.Miles 9 – 15:
My pace fell off a bit from the 3:40 pacer because the heat was starting to get to me and because I completely stopped at a water stop to refill my bottle. I wasn’t super worried because my pace was still ok to BQ. I just tried to keep his balloons in site, even though he was getting further away. It started to really feel like a struggle to maintain the pace though. Not because of my legs being tired, but because of the heat. I could feel that my heartrate was high. People around me were dropping off from the pace group and talking about slowing down and complaining of the heat.
Mile 15.5:
Something happened with my right IT band. On the outside of my right knee. At first I thought it was just soreness from running fast for 15 miles and I told myself to suck it up and keep going and quit being a wimp. But it persisted and I knew there was a problem. I have had IT band issues with my left leg a couple years ago, so I knew what it felt like. WTF? I didn’t have any issues with it in training. Why now?? Seriously – why would that happen mid-race, when it hadn’t been a problem before? Anyway, it was at this point that I knew a BQ wasn’t going to happen, so I decided to take it easy and not hurt the leg more than necessary and not get crazy sick from the heat. I figured I would slow down to a 9:00 pace and maintain that and still be ok.
Miles 16 – 26.2:
Sucked. No two ways about it. Maintaining a 9:00 pace wasn’t going to happen. My splits were between 10 and 14 minutes! Yikes! They were hot, miserable and my IT band hurt. My whole goal became finishing and not ending up in the med tent or a DNF. I knew my time would end up bad, but at that point I didn’t care. I just wanted to finish. Quitting was never an option. So I ended up walking many times during each mile, completely stopping at water stops and filling my bottle, taking cups of ice and pouring them down my bra and sponging myself off with the cold sponges they were handing out. I cramped up 3 separate times and got GI issues that required porta-potty stops. I am pretty sure that was from the heat, and not so much the speed. I have also noticed that GI issues happen for me when I stop running, so I’m thinking that stopping at the water stops and along the route to stretch my IT band triggered the GI issues.
I tried to take in the crowd and enjoy it. At some points I did have fun. I noticed the festivities on the sidelines way more than when I’m really racing. There were crazy Elvis dudes, Flinstones, bands, cheerleaders, drunk frat guys trying to get runners to take beer, kids passing out candy and just TONS of spectators. It was actually helpful to have something to keep my mind off the heat and pain.
The last 6 miles were the worst. At 20 miles I told myself, “ok, just one more hour”. But with my walk breaks and pain and slow running, I knew it would be more than an hour. I was demoralized, but kept going. I knew my parents, brother and the kids would be on Superior Street somewhere, so I plugged on. At about mile 24.5 I heard my brother yell my name and saw him on one side of Superior and my parents and the kids on the other. It was so good to see them! They were my first supporters all day. I started to stop and was going to talk to the kids, since at that point I really didn’t care about time. But my dad told me to get going and finish the race, so I moved on.

Me going over to the kids and my parents 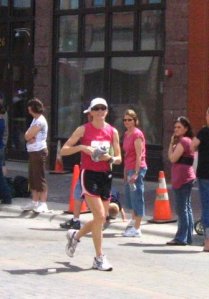 Me after spotting my brother