Why a lucky day?  Because when I hit stop at the end of our track workout, garmin’s mileage read 7.77!  Nice!  I’m ultra Type-A, so normally ending on an uneven number like that would bug me and I would jog a few extra steps in order to end up on an even, round number.  I remember stopping my garmin on 6.66 once and I IMMEDIATELY pressed start and went a few extra feet in order to not jinx myself.  But ending the morning workout with a number like 7.77, I’ll take it!

So why else was it at lucky day?

Well, the track workout rocked!  I knew going into it that it was 6x400m (with consistency a goal) and then 2 miles of 200 jog, 200 fast, repeat.  So on the way to the track I was going over the numbers in my mind and trying to think of what pace would be pushing it, but sustainable for 6x400m.  The number I arrived at was 95 seconds.  My rationale:  I think I could do an all out mile at about 6:30, maybe a tiny bit faster.  So my 400m pace should be faster, maybe 5:00 something.  But I need to do 6 of them.  So I thought 95 seconds would be very do-able.  When Coach told people their numbers, he didn’t have one set for me (because I wasn’t in the group yet when they did the all out mile), but he thought about it for a second and then (I think) just threw me behind the pace for the speedier chicks (about 3:29 marathon) and told me to shoot for 1:35 (95 seconds, for the mathematically challenged readers!).  My lucky day!  That was the number I had in mind!

Victory!  Even though the first two weren’t right on, I consider this a victory because it’s the last couple intervals that you want to be able to maintain pace on.  If my numbers had been flip flopped, I wouldn’t be as excited about the results.  But these numbers were not only right where I wanted them to be, but they are FASTER than the 400m repeats I did on my own for Grandma’s training in May (blog post link here).  Even though there were 12 of them in May, they were slower in May and the rest between each was longer then (versus only 45 seconds today).  And, even though this was a challenging workout, it wasn’t impossible.  I think I could have done more repeats.  (Maybe even 6 more, although I’m hesitant to write that in case Coach reads this and gets crazy ideas in his head for a future workout!)

The 2 mile thing with 200m fast, 200m slow SUCKED.  I am just NOT a big fan of 8 laps of anything around a track.  BORING.  Mentally a challenge to keep going.

So, why else was my day a LUCKY DAY?  I’ll tell you.  But, now is the time for my husband to STOP READING the blog, if you are reading.

Ok.  Now that we got rid of The Husband, I’ll tell you that today is lucky because I spent crazy amounts of money on NEW RUNNING SHOES!  I went to The Shoe Whisperer at Gear West.  And you all know that I love that woman!  About 2 years ago, she fixed my psycho right foot issues that were haunting me forever (after I had spent a small fortune on orthotics, a specialist doctor who referred me to a PT place that was worthless, etc.).  For $25 she does a gait analysis that kicks butt!  She always puts me in shoes that are good for me.  For MY feet.  For MY running style.  I went to her today because the shoes she put me in last time are now endangered, on the discontinue list.  So I wanted new shoes now, so that I could get used to them before Twin Cities.  I also decided it was time to get racing/trainers for the track workouts.  I figured if nothing else, they might make me FEEL fast and then they would motivate me to actually be fast.  The Shoe Whisperer did not disappoint.  She remembered me.  She analyzed me.  She says that she can tell that my feet are stronger now.

So the Shoe Whisperer did her thing and I walked away with $250 less in my pocket and two new pairs of shoes which I will blog about in detail later (after I actually run in them): 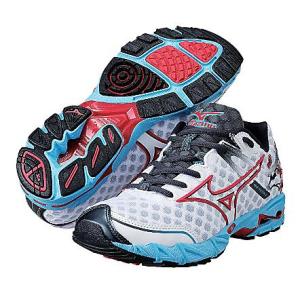 I’ve never run in Mizunos, so I’m excited to try them.  I actually think they are ugly.  Because they have FLOWERS on them (you can sort of see them on the back end of the shoe).  Hideous flowers.  I mean, really, who puts FLOWERS on running shoes?  I’ll probably get made fun of and get my ass kicked at the track.  But, as I told my 13 year old daughter, you don’t buy running shoes for how they look.  You buy based on feel.  So I bought them.

BUT, look at what my “every day” running shoes now look like: 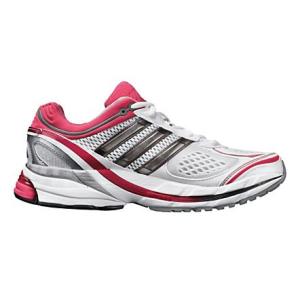 Not a very good picture, but they are PINK!  Woot!  They are the addidas supernova glide 3’s.  And I swear I didn’t pick them based on feel.  She had me try them and they felt like HEAVEN!  My other pair that I am cycling out of (because they are discontinued) are also addidas and I have actually really liked them.  The Shoe Whisperer seemed to think these are going to work very well for me “because I’m getting stronger”.  I’m sure they will work well, because they are PINK and I run fast in pink!

I feel some serious speed in my future!

ALSO – weird search of the day that led someone to my blog:  “I’m a lawyer and I don’t own a home . . .WTF?”   Hmmm, interesting.  Although I’m a lawyer, I DO own a home.  I think it’s my frequent use of “WTF” that probably gave that searcher a successful hit on my blog!