It was a beautiful, sunny, hot day for the Naked Run that I said I was gonna do.  It was part of the Born to Run, Naked Tour to promote Chris McDougall’s book.  I heard Chris speak last Fall and loved everything he said – very motivating, inspiring and fun.  Today’s event was very different than last fall (where there were hundreds in attendance, it was inside and it was Chris speaking for a longer period of time).  Today was a very cool, laid back event that was sponsored by Gear West and The Bookcase.  A free 5ish mile run, followed by book signing, brief talks by Eric Orton, Chris McDougall and Scott Jurek, then a Q&A session.

The “Naked” part was supposed to be running barefoot or minimalist, if you chose. Otherwise running without garmins and gadgets and tech stuff.  I kept my shoes on, but went garmin-less!

Chris was very funny, just like he was last year.  His main message was that so many people focus on getting speed (getting that 3:59:59 they need to BQ) that they forget about the fun of running.  He thinks it should be the other way around – focus on the fun and the speed will come.

Scott Jurek spoke for quite awhile then.  I have to say, he was REALLY interesting and I liked him alot.  I didn’t know a whole lot about him, other than the obvious things everyone who runs knows:  That he is THE kick ass ultra runner.  He’s WON the Western States 100 mile like 7 years in a row.  He is a bad ass.  I was surprised by how tall and skinny he was.  But I suppose that’ll happen when you run a gazillion miles a year.

I forgot my Born To Run book at home, so I ended up buying the paperback copy they had on sale there.  Now I really will have to read it again (which I definitely want to do!)

The Naked Run, in pictures:

This was about as Naked as it actually got

Eric Orton, the guy who helped Chris with his running form 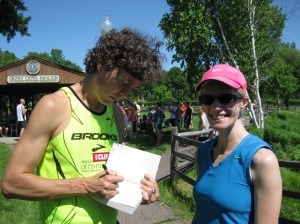 Scott Jurek and sweaty me! 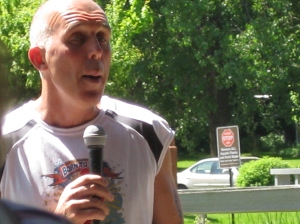 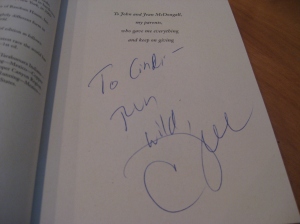 Chris’ advice to me:  Run Wild

Thanks to Gear West for hosting another great event!

2 thoughts on “Born to Run: The Naked Tour”